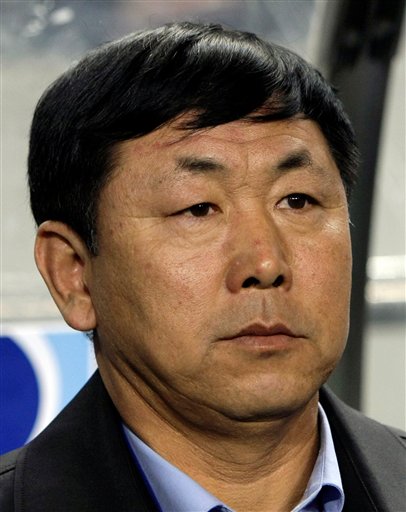 Despite guiding Korea DPR to the 2010 FIFA World Cup South Africa™, coach Kim Jong-Hun remains an unfamiliar figure on the international scene. Indeed, little is known about Hun’s playing career, where served as a defender for both club and country, other than the fact he featured in four FIFA World Cup qualifying matches for Germany 1974 and Mexico 1986. However, his achievement in moulding an inexperienced group into one of Asia’s most competent sides has earned him an undisputed place among the continent’s elite tacticians.
A former mainstay in the back line with local giants April 25 Sports Group, Kim opted to stick with the club after hanging up his boots, switching to the coaching staff of domestic giant. He proved an eager learner during his apprenticeship, finishing an athletic course at a local university before taking part in coaching courses.
Kim quickly established himself as a highly respected strategist on the home front and assumed the reins of the national team in 2007, charged with the task of leading the team through Asia’s qualifying campaign for the South Africa 2010. This indeed was a tall order for both Kim and his team given the nation’s 44-year absence from the FIFA World Cup. However, with a host of talented players coming through the ranks, the coach aimed to make up for their lack of international experience with a tactical approach.
In attempting to qualify for Germany 2006 a rampant Korea DPR stormed into Asia’s final qualifying round where they displayed attacking football against the continent’s best. Entertaining they may have been, but the Chollima lost five straight matches to receive the wooden spoon. Taking into account the past lessons, Kim embarked on a revolution within the national team switching their offensive game plans into more pragmatic strategies.
One of his key tactics was shoring up the rearguard by deploying a five-man defensive line, with Ri Jun-Il more withdrawn as the sweeper, a role coach Kim used to play for the national team during his playing years. His new formation proved an instant success during the 2008 East Asian Football Federation(EAFF) Championship when an unfancied Korea DPR drew both Korea Republic and Japan only to lose to hosts China in the closing game.
With Kim pulling the strategic threads, Korea DPR went on to impress in the subsequent third round of qualifying for the South Africa 2010, finishing the only team to have conceded zero goal as they marched into the concluding round, where they held off the likes of Iran and Saudi Arabia to take one of Asia’s four automatic qualifying slots.
Born in September of 1956, coach Kim was a nine-year-old during his country’s fairy-tale run-up to the last eight in their FIFA World Cup debut at England 1966. 44 years on, the man responsible for taking Korea DPR to their second appearance at the world football’s extravaganza is just keen to emulate their old feat.